Overall U.S. smartphone sell-through was down 25 percent year over year in Q2 2020, but Apple and Samsung were able to maintain sales somewhat better than other brands due to a strong online presence. In Apple’s case, the new 2020 iPhone SE, released in April, also helped Apple’s sales volumes throughout the quarter. 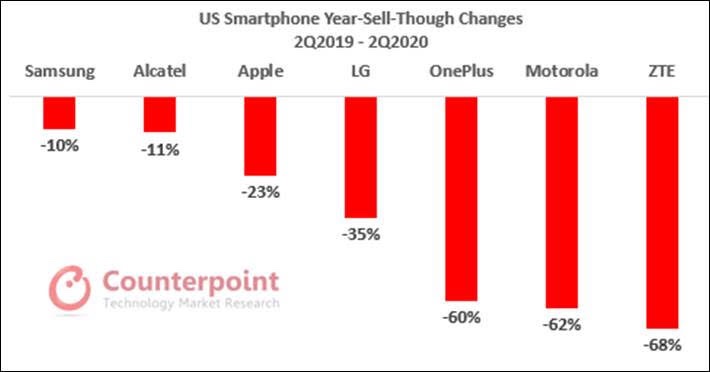 Apple volumes grew through the quarter and were especially helped by ‌iPhone SE‌ volumes. It was not a typical Apple launch with large fanfare and a launch event at the Steve Jobs theatre, which normally also includes a blitz of TV ads. However, the device has been successful and selling above expectations in both postpaid and prepaid channels. Since the ‌iPhone SE‌ launched, carrier stores and national retail have been re-opening. Some channels saw large promos to draw shoppers back to stores. This was especially true within Walmart, Metro by T-Mobile and Boost.

Apple’s ‌iPhone SE‌ sales are “unlikely” to cannibalize sales of the 2020 iPhone 12 models because ‌iPhone SE‌ purchasers are “more pragmatic” about price, less concerned with 5G connectivity, and the smaller display is “not considered a hindrance.”

According to Counterpoint Research, mid-March through mid-April saw the weakest sales in the overall smartphone market, but things began picking up again in the back half of April after consumers received stimulus checks and retail stores began reopening. Smartphone sales for May through the end of June grew week over week, and June 2020 sales were ultimately stronger than June 2019 sales.

This article, “Apple’s iPhone SE Sales a ‘Bright Spot’ in Q2 2020 Thanks to Android Switchers and Those Upgrading From iPhone 6s or Older” first appeared on MacRumors.com