Apple today doubled the price for upgrading the RAM on the entry-level 13-inch MacBook Pro, with customers in the United States now being charged $200 to move from 8GB to 16GB compared to the previous $100 upgrade price. Similar increases are seen in other countries, such as moving from €125 to €250 in Germany and from £100 to £200 in the United Kingdom.
Current pricing on RAM upgrade for entry-level 13-inch MacBook Pro

While Apple does sometimes adjust upgrade pricing as its costs for components change over time, what makes today’s change unusual beyond the fact that it is an increase rather than a typical decrease is that the 13-inch ‌MacBook Pro‌ just launched less than a month ago.

The entry-level model is largely similar to its predecessor, using the same 8th-generation Intel processors and many other internal components have similarly been carried over. Still, it is considered an updated model with changes like the new Magic Keyboard and it’s extremely rare for Apple to adjust pricing so soon after launch, suggesting an unexpected increase in Apple’s costs being passed along to consumers. 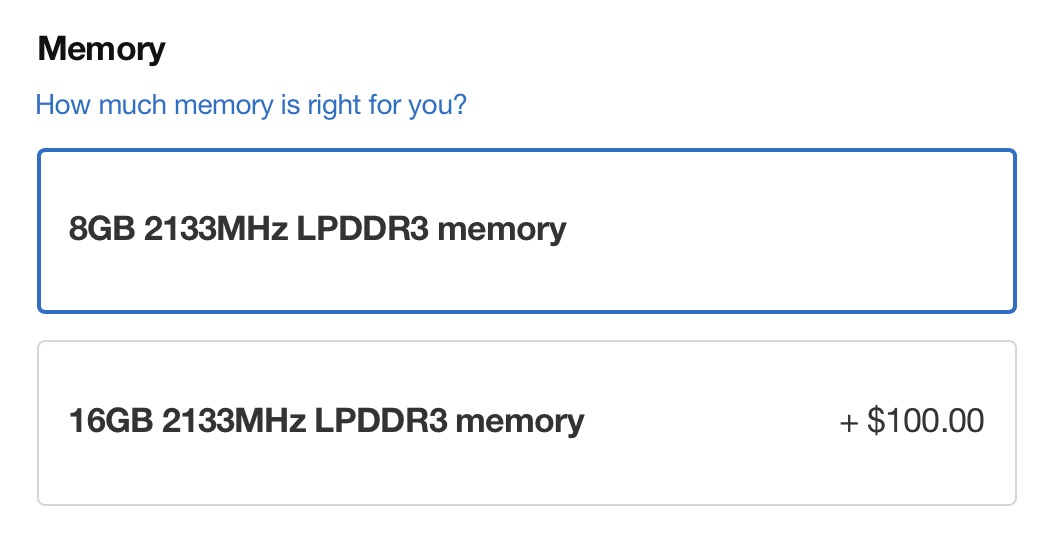 Supply chains around the world have been disrupted in recent months due to the current health situation, but China, where most of Apple’s manufacturing partners operate, has been reopening ahead of many other countries around the world as it was the first to shut down. So with pricing having been set on the 13-inch ‌MacBook Pro‌ just a month ago, the supply situation should generally have improved since then rather than worsened.

Apple does not appear to have altered pricing for RAM upgrades on its other Mac lineups, although different machines use different types of RAM, so a shortage or cost increase for one specific type would not necessarily affect all of Apple’s Macs. Even the high-end 13-inch ‌MacBook Pro‌ is unaffected, as it uses a faster type of RAM paired with its newer 10th-generation Intel processors and upgrading from 16GB to 32GB remains priced at $400.