Apple’s iPhone 11 was the most in-demand smartphone during the first quarter of 2020, even as the world weathered a global pandemic, according to new research shared today by research firm Omdia.

Apple shipped an estimated 19.5 million ‌iPhone 11‌ models during the quarter, thanks to the more affordable price tag of the device along with its robust feature set.

“For more than five years–even amid shifting conditions in the wireless market and the global economy–one thing has remained consistent in the smartphone business: Apple has taken either the first or second rank in Omdia’s global model shipment ranking,” said Jusy Hong, director of smartphone research at Omdia. “Apple’s success is the result of its strategy to offer relatively few models. This has allowed the company to focus its efforts on a small number of products that appeal to a broad selection of consumers and sell in extremely high volumes.”

Apple’s iPhone XR, which was the best-selling smartphone in the year-ago quarter, took the fourth spot with 4.7 million units shipped. The ‌iPhone XR‌ was more popular than the iPhone 11 Pro and Pro Max, though it’s worth noting that those two smartphones were counted individually rather than together. 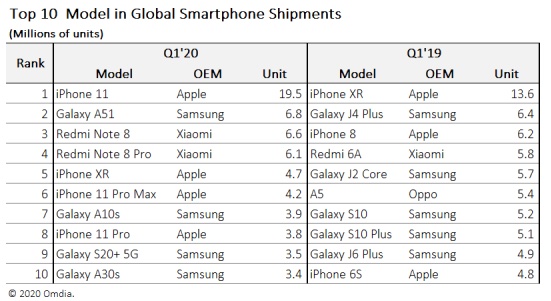 Omdia is a research firm that was established following the merger of the research division of Informa Tech and the IHS Markit technology research portfolio.

This article, “Apple’s iPhone 11 Was the Most Popular Smartphone in Q1 2020” first appeared on MacRumors.com